Due to a combination of low snowpack and precipitation, we are experiencing lower-than-usual water levels at Sullivan Lake. We continue to operate Sullivan Dam at minimum flows in compliance with our license requirements. However, with June’s precipitation reporting at only 41 percent of average, it is not expected that lake levels will increase this season. The graph below shows the low levels of precipitation we have been experiencing since September 2018. 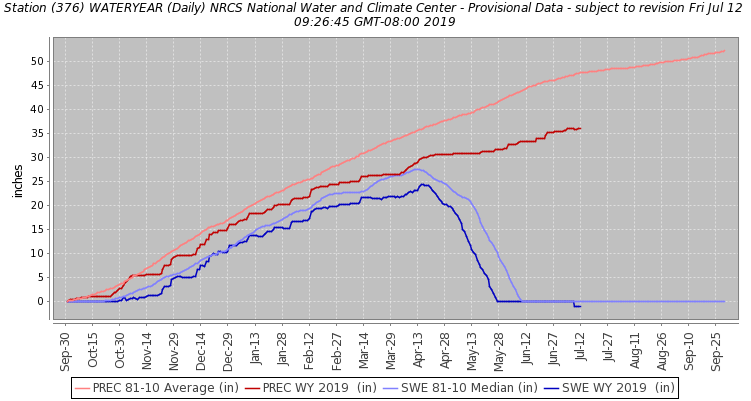 The Sullivan Creek Project was constructed in 1909 by the Inland Portland Cement Company. It generated power until 1956, when a portion of the wooden flume collapsed. The PUD obtained a license for the project from the Federal Energy Regulatory Commission (FERC) in 1958, and operated it as a water storage project for downstream generation until 2013. In 2005, the PUD made the decision not to seek a new license when the current license expired in 2008. Because a large part of the project is located on U.S. Forest Service property, FERC instructed the PUD to apply for the surrender of its license and obtain Forest Service authorization for any facilities that would occupy federal land after the effective date of the surrender.

In 2008, the PUD entered into negotiations with the Forest Service and other federal, state, local, tribal, and other agencies to develop a plan for the project. Sportsmen, recreationalists, lake cabin owners, white water enthusiasts, and environmental groups were represented in the negotiations. The following year, Seattle City Light (SCL) joined the negotiation process. SCL was in separate negotiations for its Boundary Hydroelectric Project relicensing, and realized the potential for mitigation benefits to all parties by consolidating these projects.

FERC approved a surrender agreement in 2013. Following are the requirements of the agreement and the current status and/or schedule of each:
Sullivan Lake will be maintained.

Mill Pond Dam was removed in 2018. Under the terms of the surrender agreement, the PUD and SCL collaborated on the Mill Pond Dam Removal Project. SCL managed and funded the project. SCL’s role was tied to its new license for Boundary Dam for the improvement of fish habitat.

The Sullivan Lake Cold Water Release Project was completed in 2015. Cold water from the bottom of Sullivan Lake is siphoned through a 900-foot, 54-inch diameter pipe into Outlet and Sullivan Creeks to lower water temperatures in the creeks, to improve native fish habitats in the streams. The project also included repairs to the Sullivan Lake dam.

Through an agreement with the Washington State Department of Ecology, water will be sold to the State to support stream flows and offset new water uses in six Northeastern Washington counties. Through this agreement, 14,000 acre feet of water is released from Sullivan Lake during June through September each year. The schedule for water released during June through August is minimized to provide for continued recreational uses at Sullivan Lake and meet water quality standards. Funds from the water sale were used for expenses related to the decommissioning of the Sullivan Creek Project, including the cold water pipe project and dam repairs.